OK – so this isn’t really low carb in any way. However, in my defence, I felt I needed to get a basic Nann right before figuring out how to lower the carb content! You can make these in the oven but I prefer to make them straight on the grill of my barbecue.

Just as an FYI, you can cook these and reheat them later; the key, I’ve found is to slightly underdo them on the barbecue grill then brush on the coriander and garlic butter/ghee mixture and let them cool and refrigerate them. Re-heat them in an oven at about 180c. 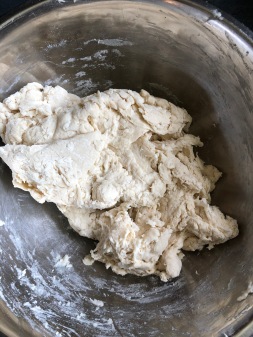 Add the salt and flour to a bowl and mix. Add the yeast to the water, milk and yogurt and whisk. Pour the yeast liquid over the flour and using a large metal spoon, mix it together such that there are no pools of liquid and no dry flour – it should all be a sticky mess.

Cover lightly with cling film or a damp towel and leave for about an hour. After an hour,

wet your hands (so the dough won’t stick to it) and fold the sides of the mass of dough by lifting up a corner and pulling it into the middle repeat all the way around the dough. You’ll find the dough becoming smoother and more elastic as if you have been kneeling it for ages. Cover again and return to it in about 30 mins and repeat the above technique.

Divide the dough into 12 pieces (either by eye or by weighing) and form into balls. Leave them on a floured tray at room temperature to begin to gently rise again, probably about 20- 30mins.

Flour the surface and pick a ball of dough up and flour it too. Press it into a rough circle on the work surface and gently roll it into a circle about the thickness of a 10p piece. It may have a tendency to pull back to a smaller shape or stick, but roll repeatedly and gently and it will stretch. Then give it a little stretch by hand to make it an oval shape.

Pick up the circle of dough and either place directly on the barbecue grill or on the oven baking tray. It will take about 40 seconds on each side on the barbecue or about 3-4 mins in the over – no real need to flip them in the oven! If you are making to eat later, take them off the heat a bit earlier while they are still very soft but not raw.

Once off the heat you can have them plain but I like to brush them in a mixture of ghee, crushed garlic and finely chopped coriander with a pinch of salt. Or you can use just plain ghee or a mixture with chilli in if you prefer!

One thought on “Nann”